A brief summertime post, leaning on visuals, before getting into other matters closer to Fall. In the space of a “free” week at midsummer, two occasions for visits — this one as the first of two parallel entries. (The second looks at Jess’s murals on the walls of Pauline Kael’s Berkeley house.) 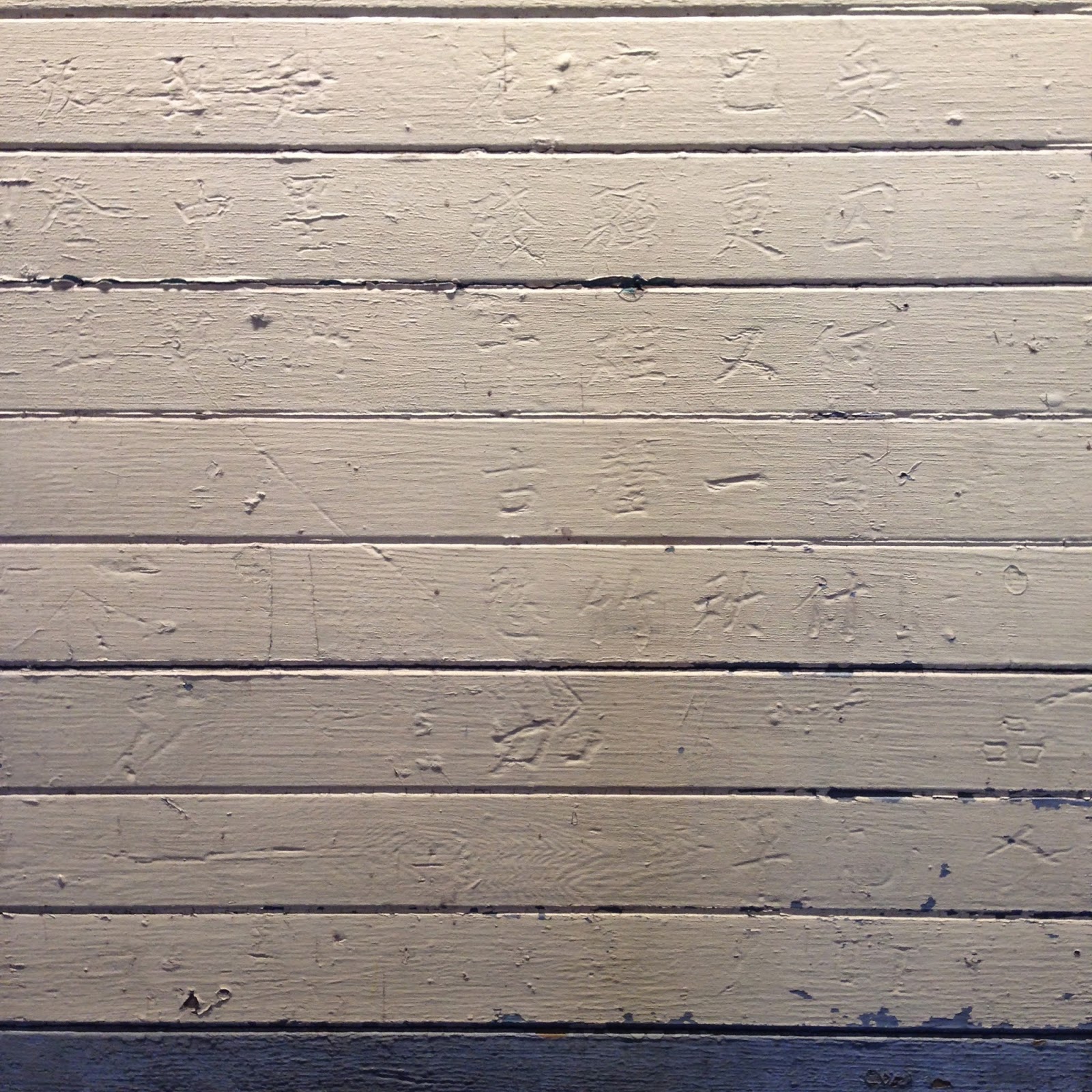 In the room for some time before starting to recognize that the walls around us are covered in writing — the writing then covered in layers of different colored paints. How this corresponds to Ai Weiwei’s dipped-in-housepaint Neolithic Chinese vases? 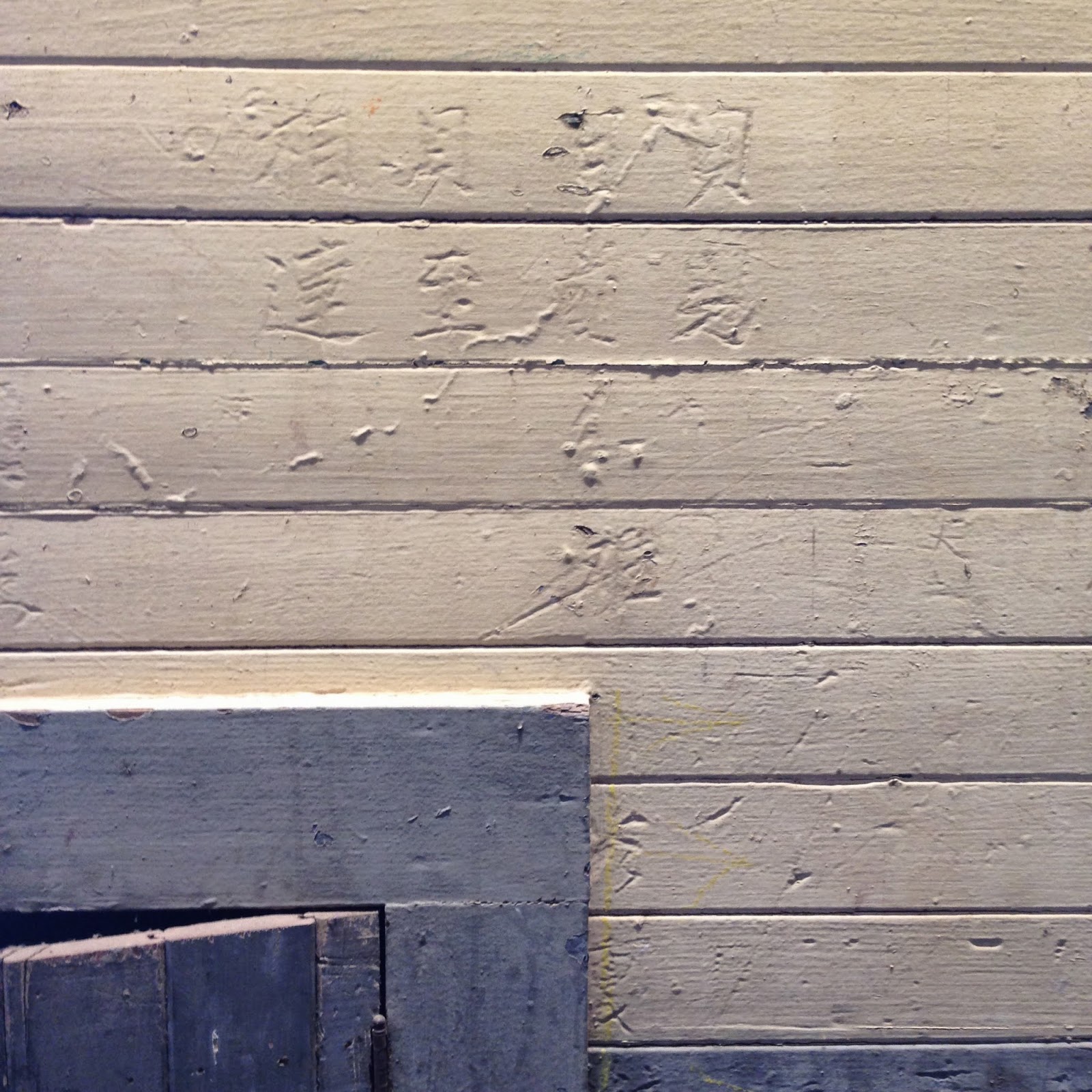 One morning in the history of the detention center, an administrator paid a visit to the barracks where mostly Asian, mostly Chinese immigrants were held confined, and declared the walls were littered with graffiti that needed to be painted over. 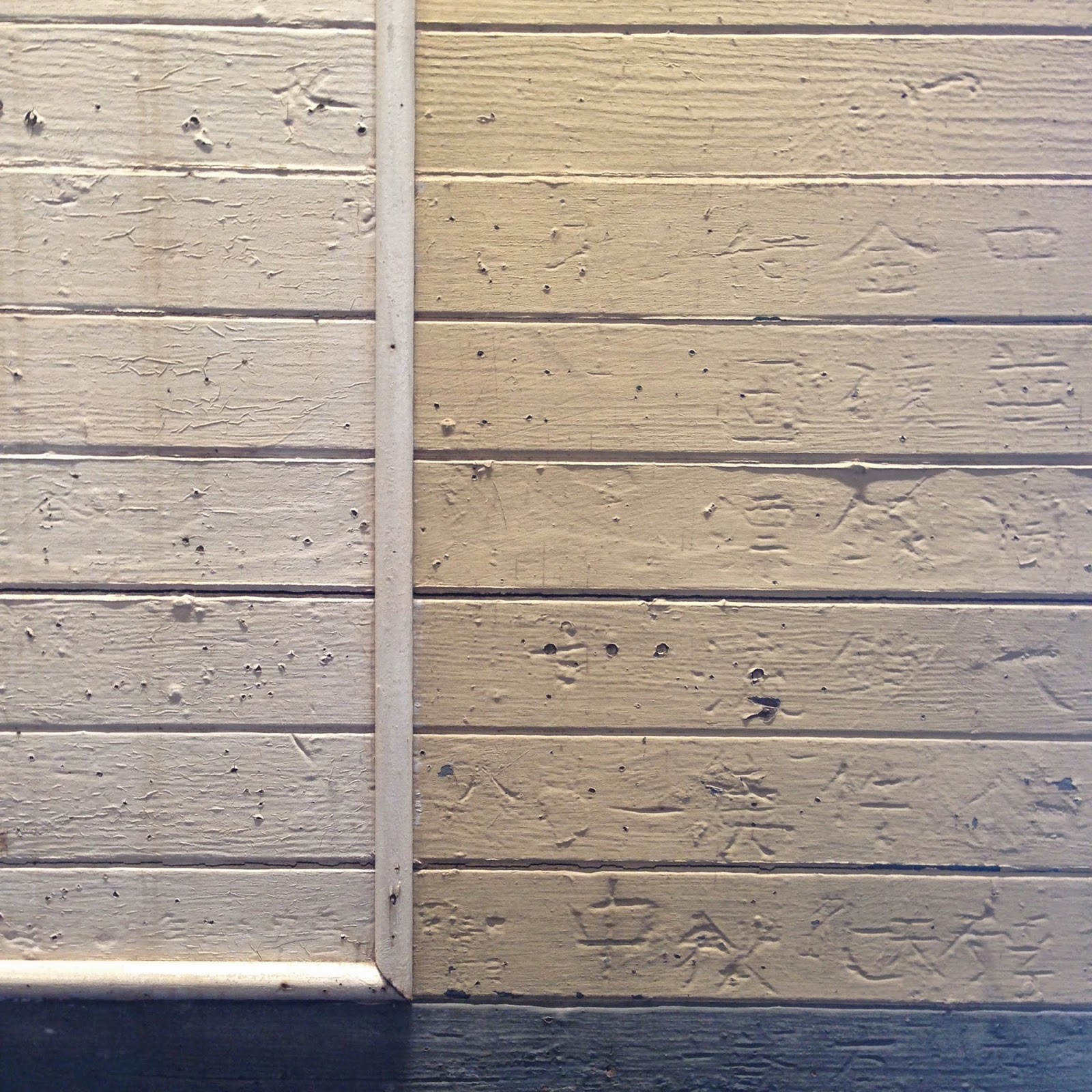 Every administration has the chance to get the writings on the walls painted over, some of them plastering first into the carved recessions, so that the characters (the “ideograms”) drop backward under sheets of lead house paint spread on. 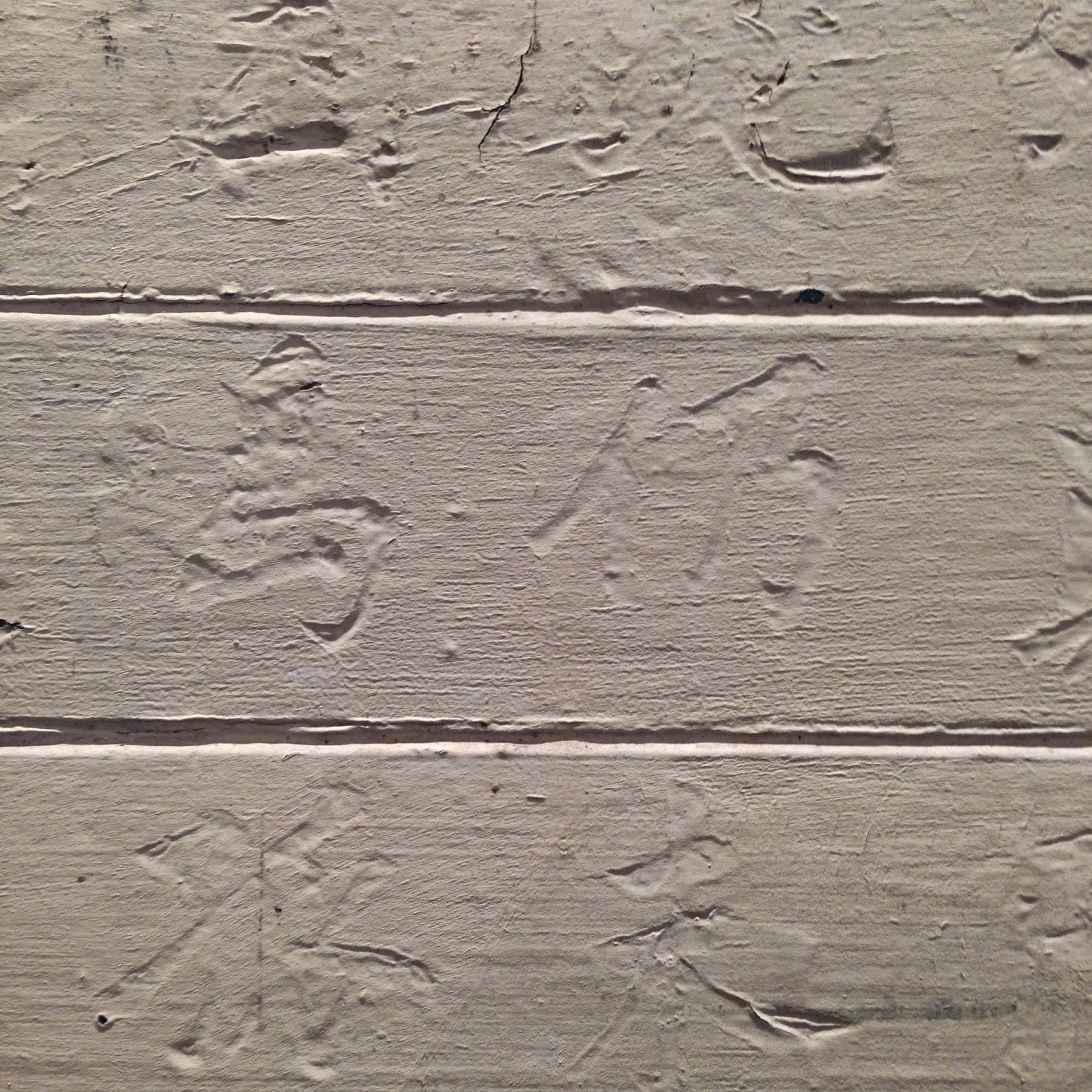 Wasn’t it the case that the villages would select their brightest youth and pool their funds to buy his ticket to be shipped to Gold Mountain 金山, that the educated kids, the ones who knew poetry, were supposed to have the best chance of succeeding? 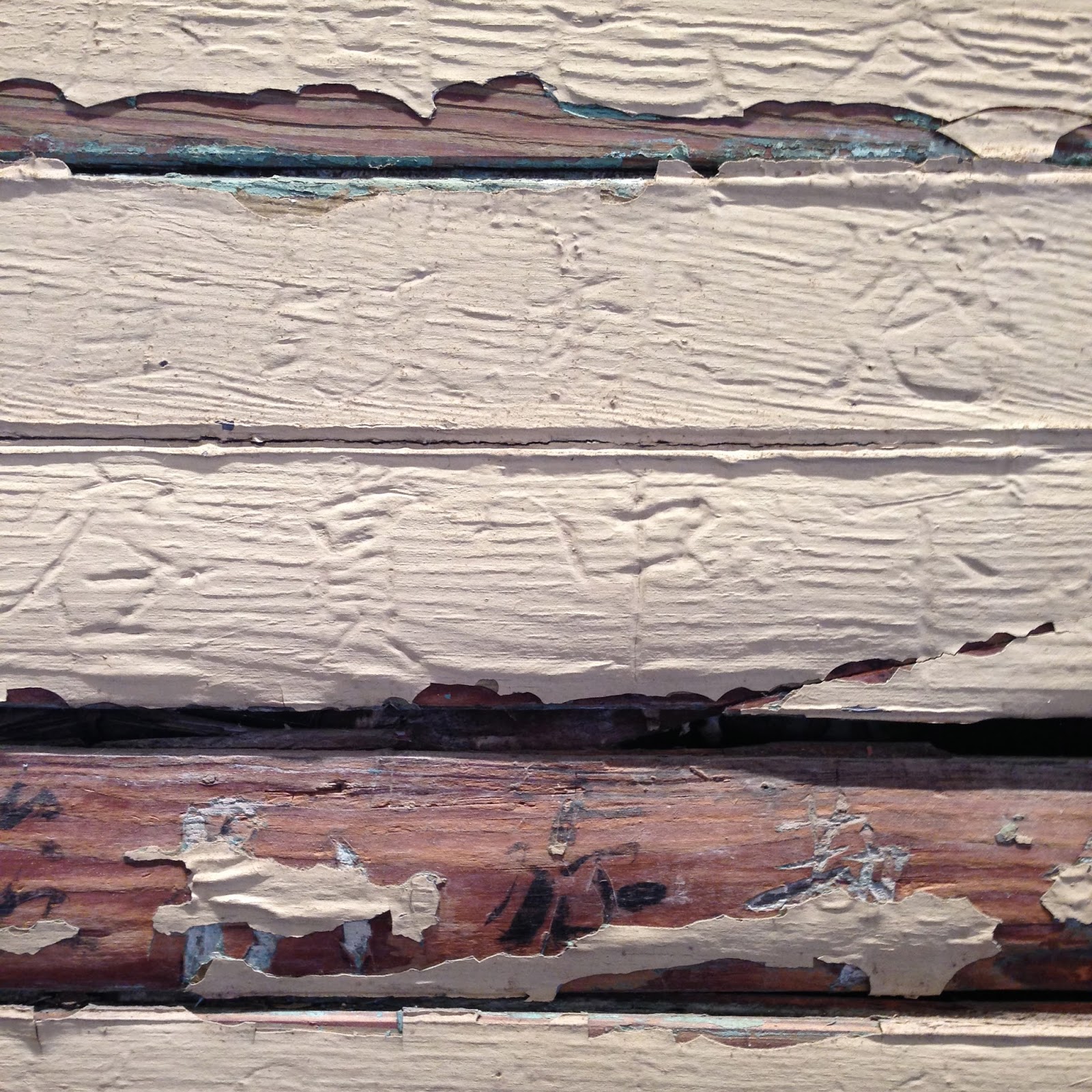 The technique involved writing on the wood first with inkbrushes, then carving the characters away with a sharpened hand-tool, so even filled up with plaster and painted over, what they wrote left its shadow impression to be read on the surface. 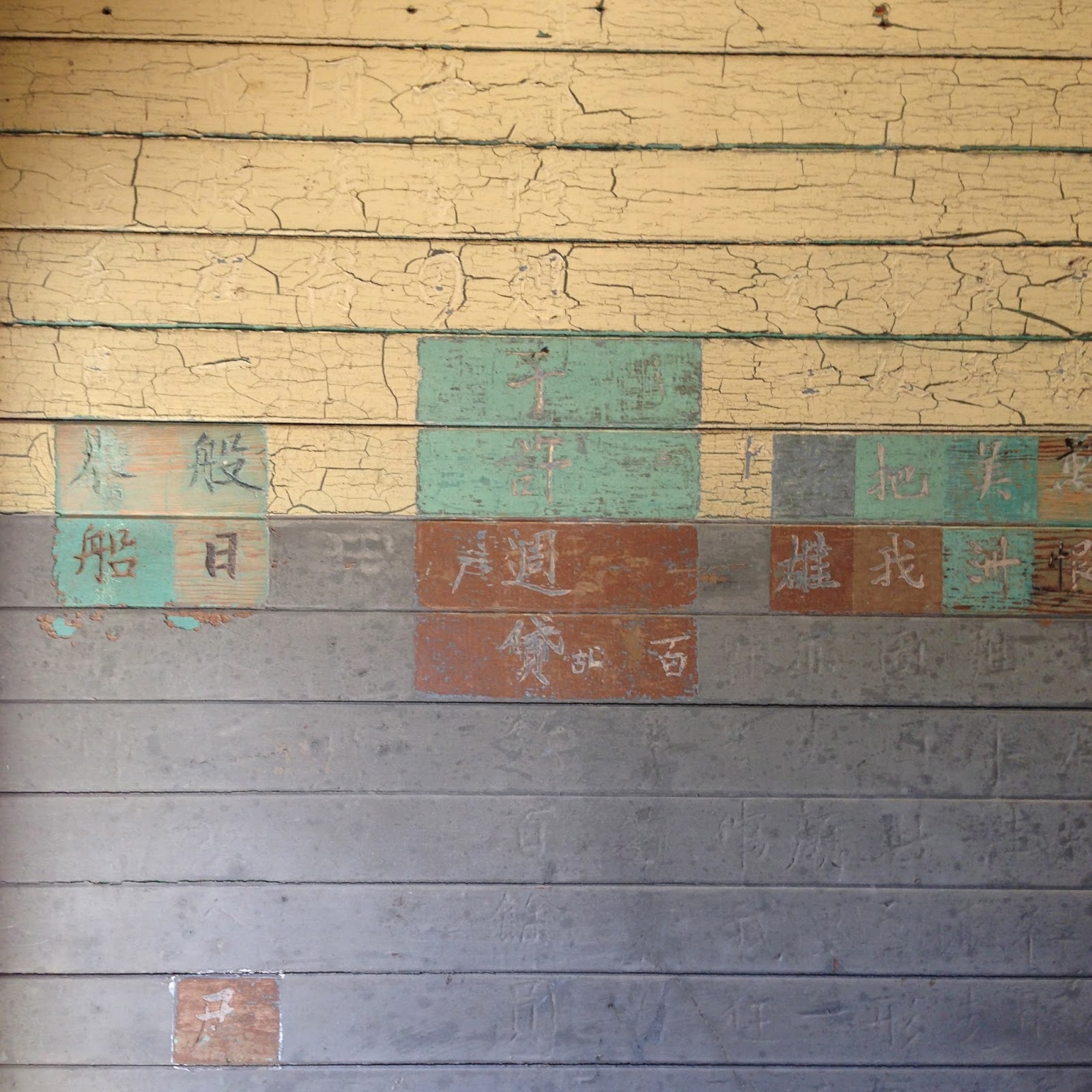 Didn’t Jon Jang note something the other day, how there are as many Chinese (say, Chinese American) people living in San Francisco today as there were inside the fifty United States of America when he was a kid on the peninsula some forty years ago? 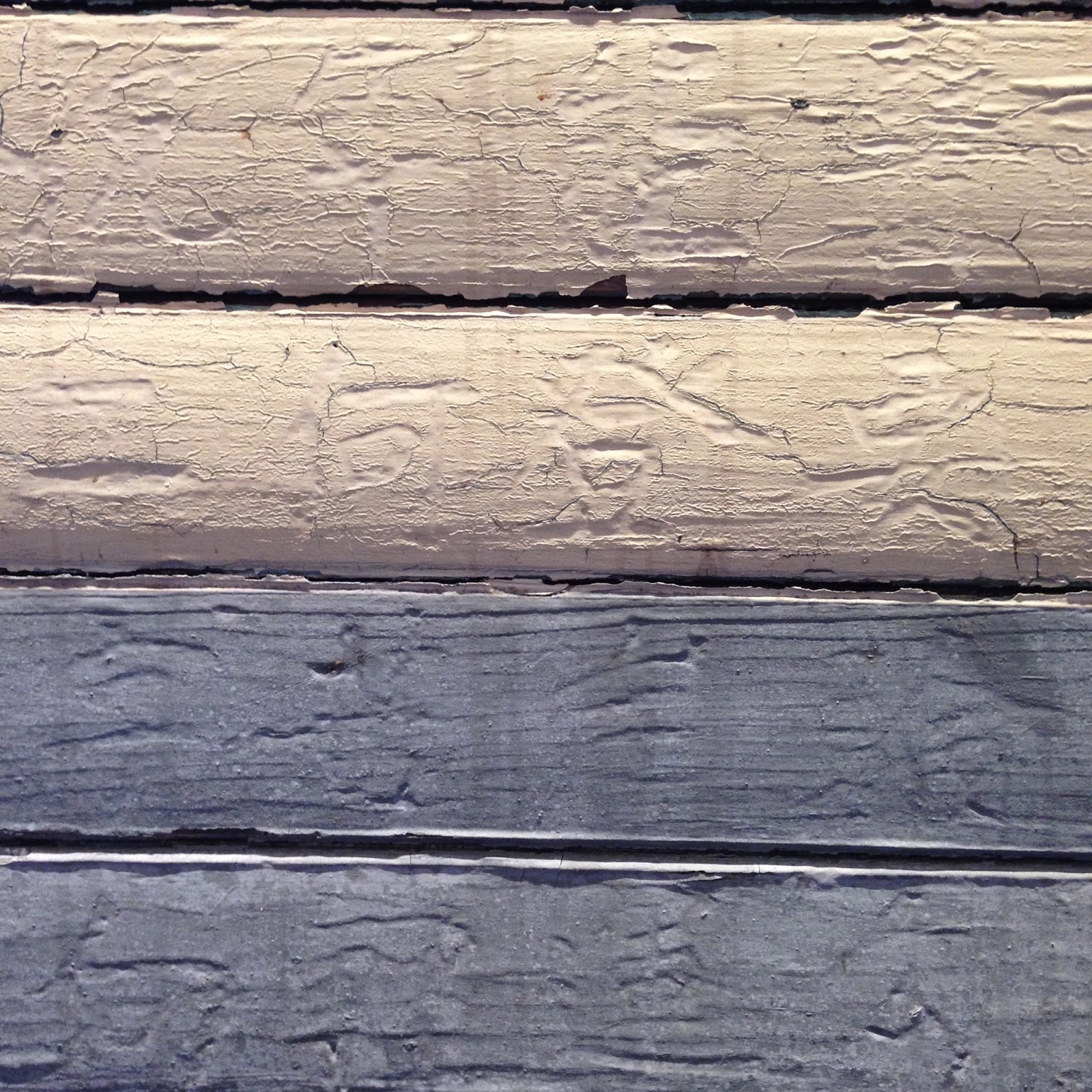 How’d it happen, instead of the National Park Service bulldozing the detention center flat, a few of the local Chinese Americans came in, got together and read the walls, transcribing then translating the transcriptions, turning the building into a book. (*) 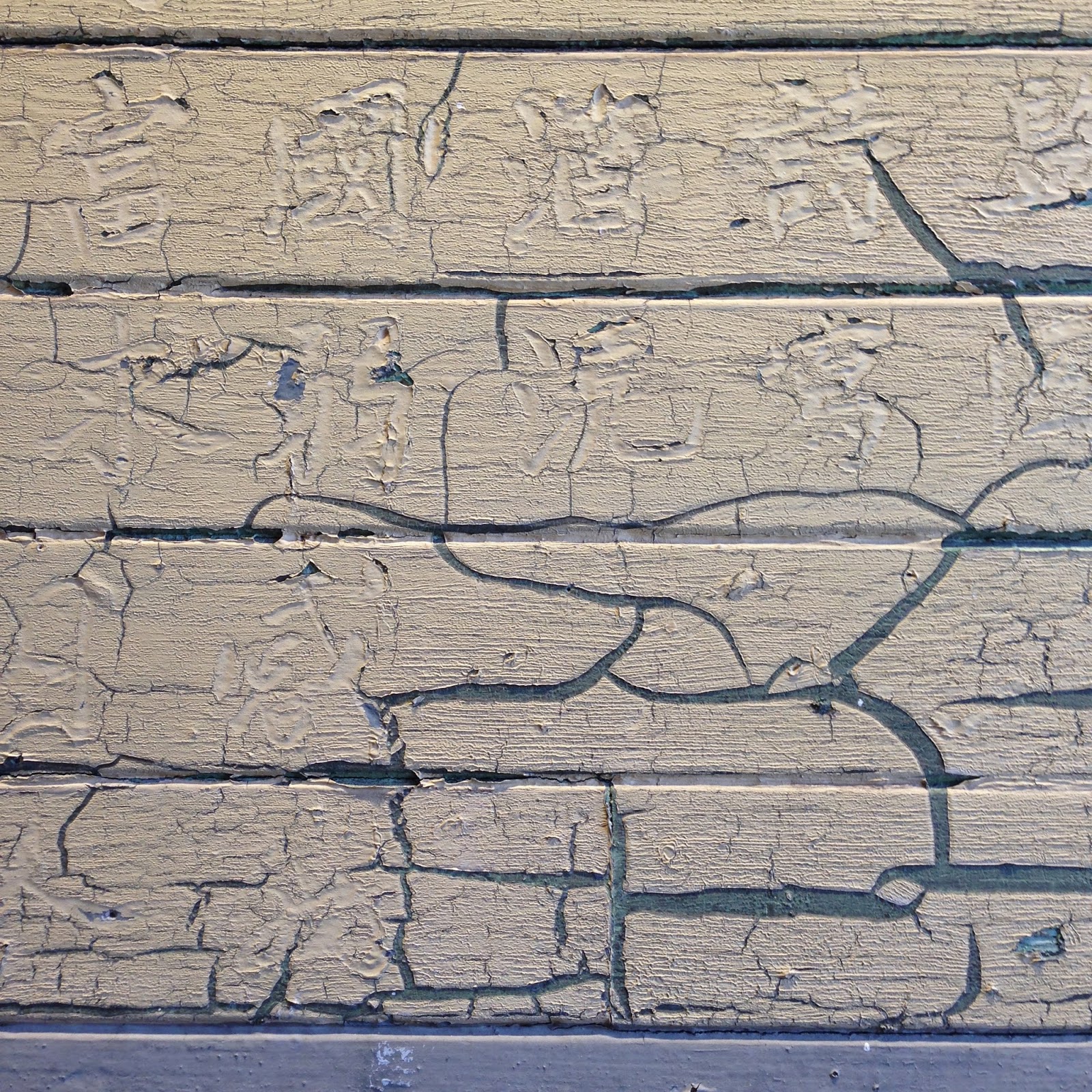 The Chinese immigrants (and other Asians, multiple languages got used) wrote what they carved in the walls of the island barracks as poetry, where the guards and later some visitors also wrote there, and what they wrote was mostly not in sentences. 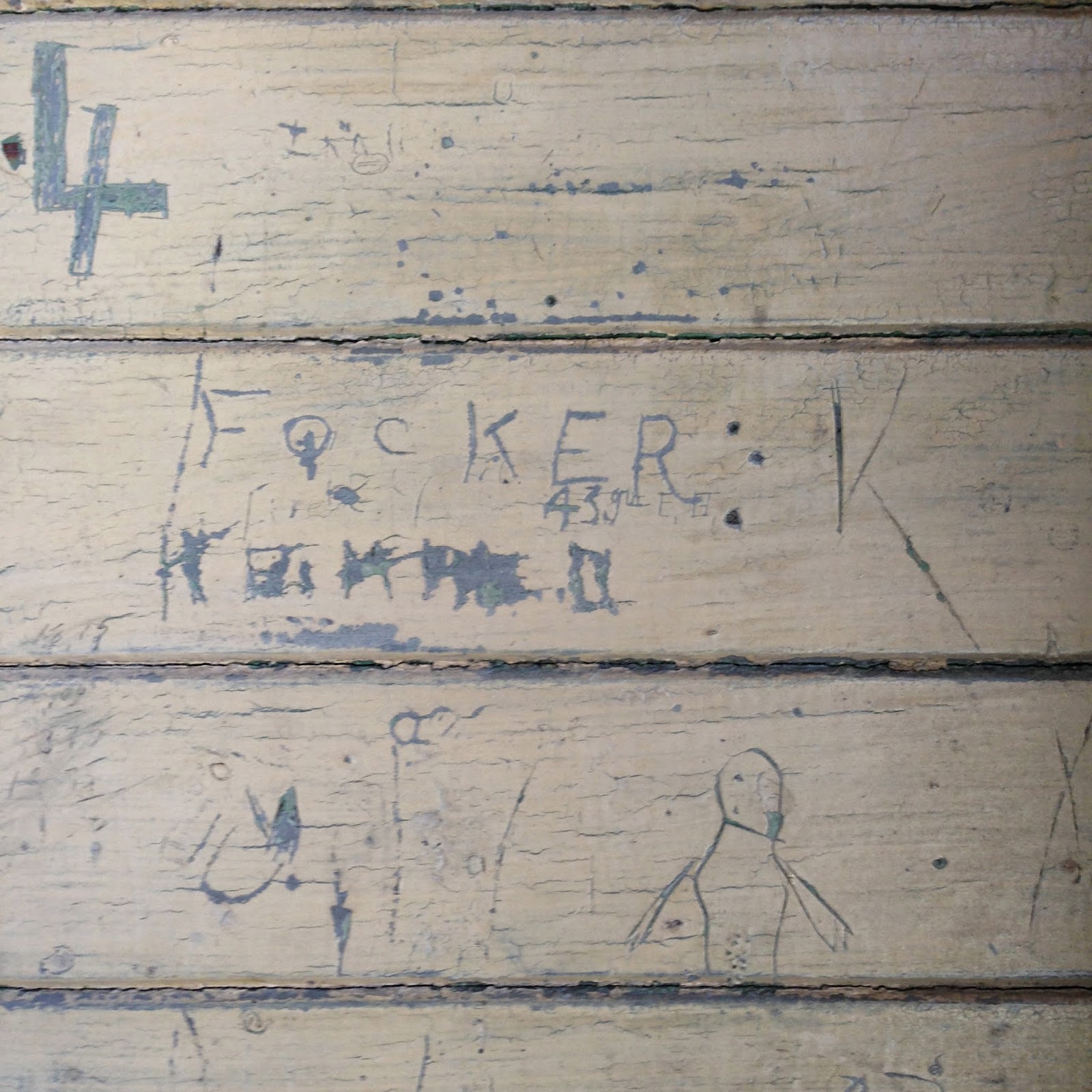 The way sunlight falls into the rooms, so they look stripped down, effective at being filled up with persons passing through them, emptying out one or a few persons at a time, then refilling themselves with new ones moving into the spaces folded open. 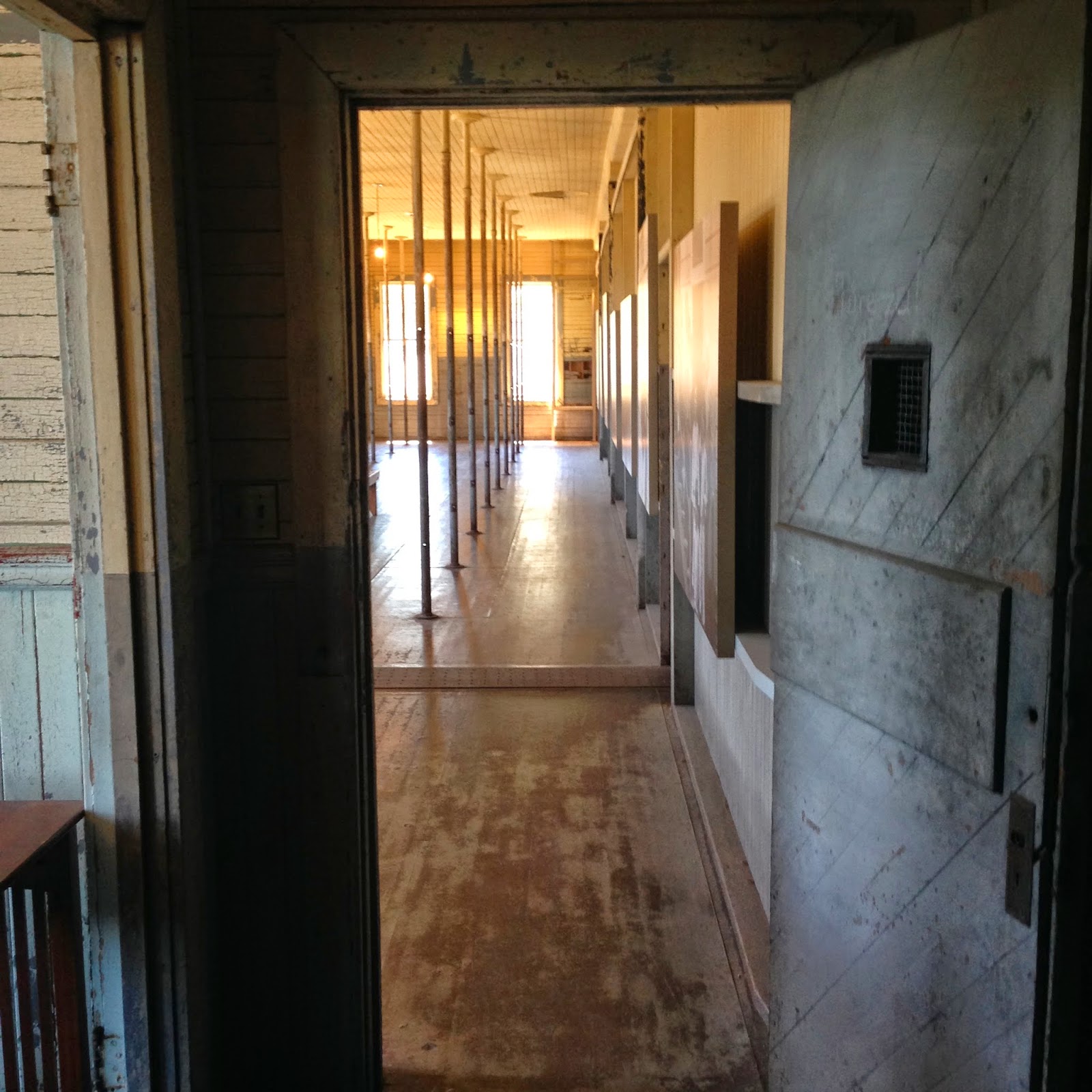 The beds they’ve left up to show how the rooms appeared under use smell of must, mildew, and why wouldn’t they, close to the water, regularly dosed in fog, no doubt if they had any heat it wasn’t enough to really warm things enough to prevent that. 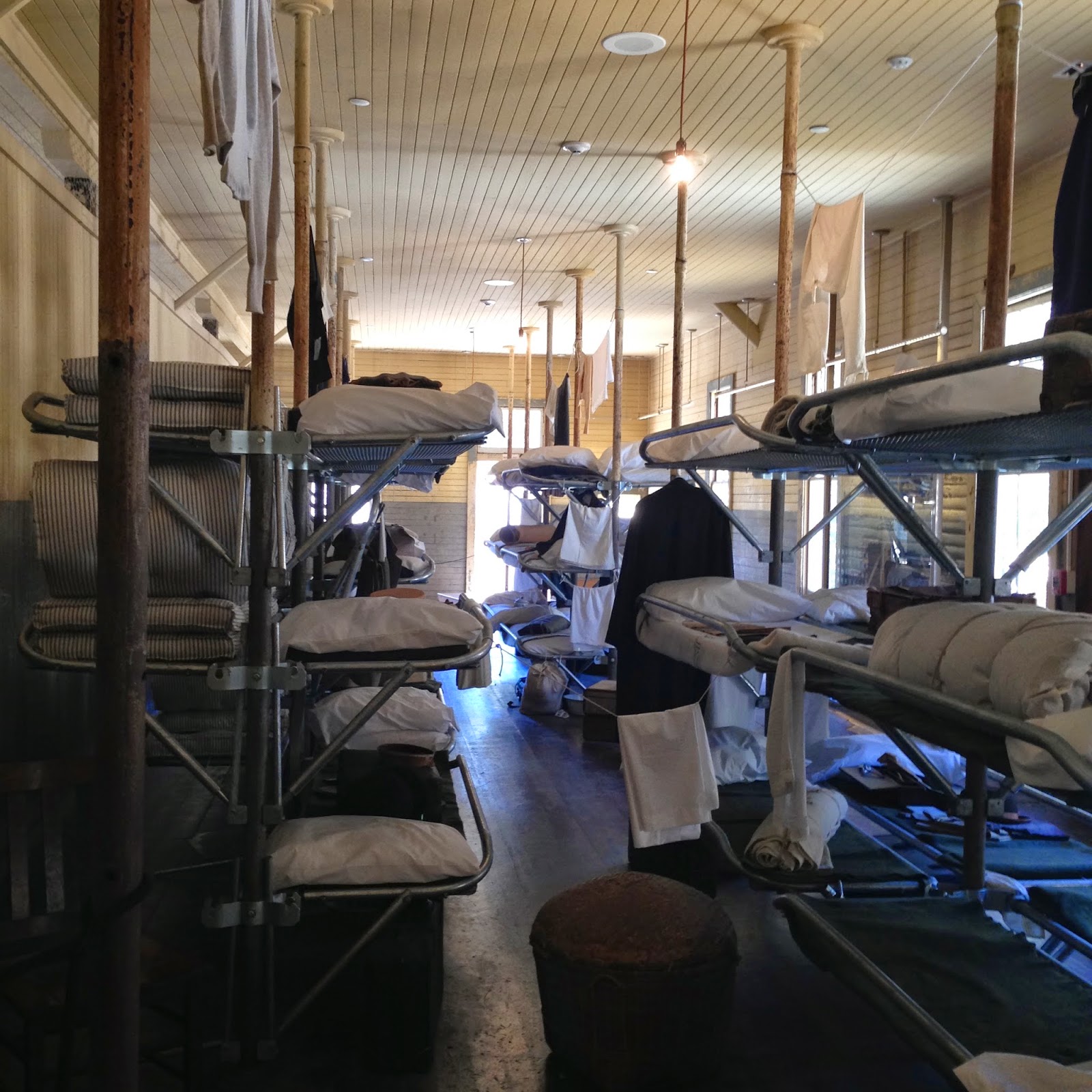 How Sean Labrador y Manzano, working with APIA writers addressing trauma (it’s inscribed even in the fact they’re writing in English, layered over earlier languages), has a poster for the symposium he’s organized using a picture of these beds. (**) 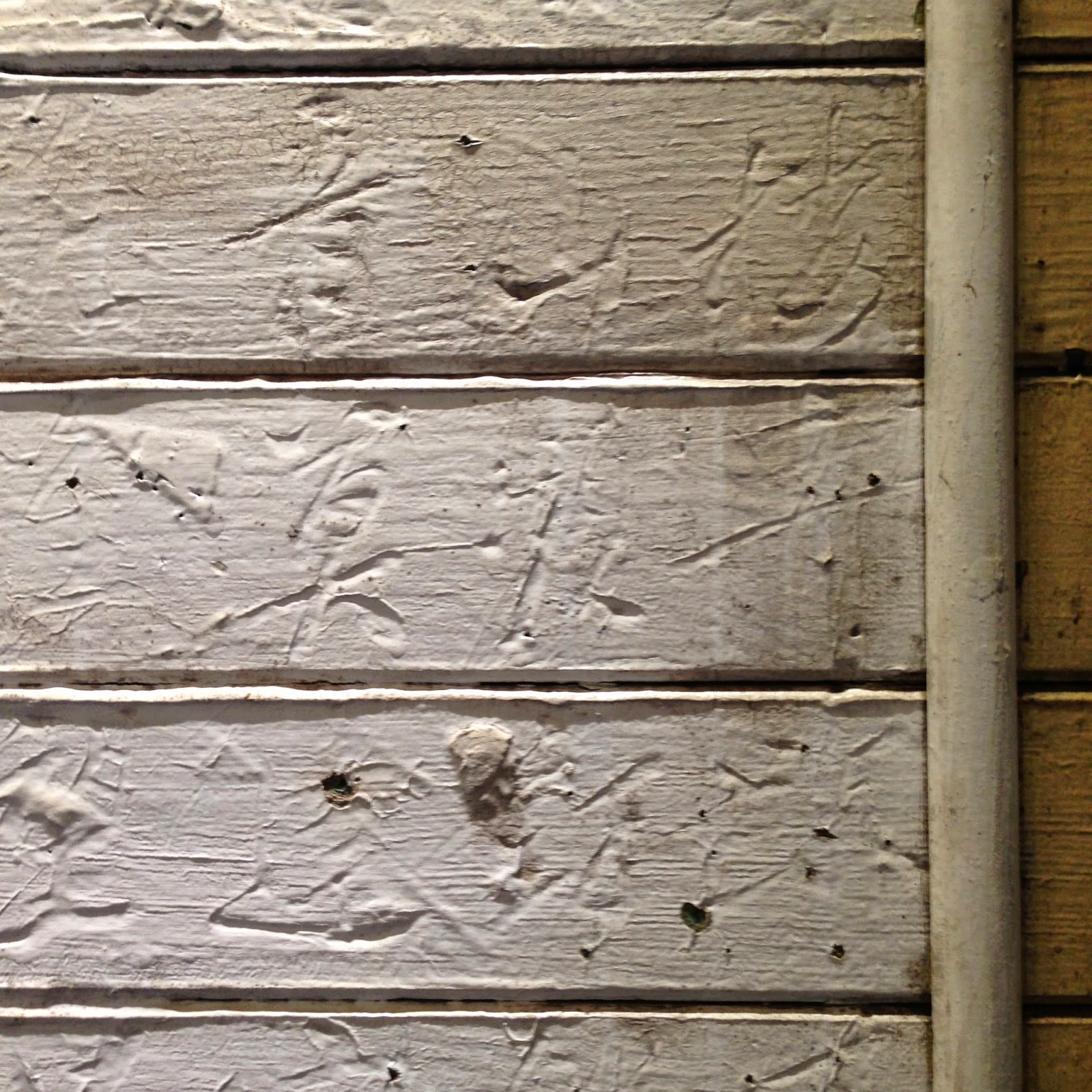 It’s basically ‘white’ housepaint (the cheapest?) they prefer — don’t they? — when arriving on board to clean up the area, mopping up operations, intended to import some tidiness over this unruly, angular, illegible, un/translated, silent speech.

(*) The book in question is still Him Mark Lai, Genny Lim, and Judy Yung’s great collectively authored work, Island: Poetry and History of Chinese Immigrants on Angel Island 1910–1940, HOC DOI (History of Chinese Detained on Island), a project of the Chinese Culture Foundation of San Francisco, begun 1976—published 1980—subsequent edition available from University of Washington Press; their work transcribes and translates to American English much of the poetry from the barrack walls, with contextualizing history and oral histories based on interviews with those local migrants who were still available and would talk with them about Angel Island.

Steve Dickison
San Francisco, California, United States
"Nothing promises that you will wish to self-fragilize in front of an author, or a painting, or a film, to such a degree that it will con/cern you, and its musicality will start to work for you." (Bracha Ettinger)